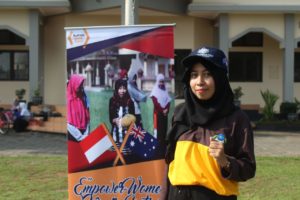 What is Santri Oz?

What has happened in Indonesia?

Why does this initiative matter?

Women represent half of the world’s population, therefore, also half of its potential. United Nations (UN) Secretary-General; Kofi Annan (2003) said that “when women thrive, all of society benefits, and succeeding generations are given a better start in life”. Further, it has been shown that empowering women spurs productivity and economic growth (UN Women, 2020). Unfortunately, there is still a long way to go to achieve full equality of rights and opportunities between women and men in many sectors of life. In my context of Indonesia, there have been gender bias towards the roles and involvements of women in the fields of politic, education and sport.

For instance in the field of sport, it is kind of taboo for Muslim girls who wear hijab playing football, while I see women playing footy (Australian rules football) during my postgraduate study in Melbourne. Even footy can be used to empower Australian women. Therefore, I make this Santri Oz’s initiative as the platform for empowering Indonesian (Muslim) women and young girls which aims to educate better society and promote gender equality. The programs on the website consist of intercultural activity including footy coaching clinic, women’s story and female creativity. I believe those programs will be impactful in empowering women and then inspiring nations.