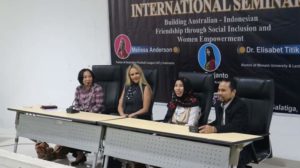 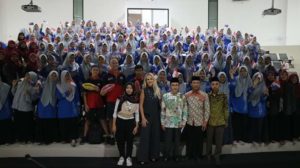 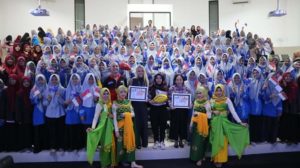 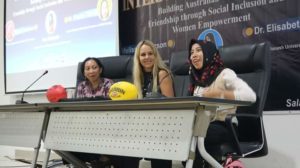 On 3 July 2019, we conducted an international seminar with the topic “Building Australian Indonesian Friendship through Social Inclusion and Women Empowerment” at the Auditorium Campus 3 of IAIN Salatiga. This seminar aimed to give the female students of Islamic Boarding School (Ma’had Al-Jami’ah) IAIN Salatiga and the public understanding on the importance of Australia – Indonesia relationship. Further, this seminar led to the introduction of Footy Coaching Clinic in Salatiga that is funded by Australia Awards in Indonesia through Alumni Grant Scheme (AGS). As the project of Footy Coaching Clinic is using Australian Rules Football (AFL), it is important to firstly develop the students’ understanding of Australian culture including how Aussie’s women participation in sport besides this country is Indonesia’ neighbor. In addition, this seminar resulted to an encouragement on the need to empower women in staying healthy and to promote gender equality. This is needed that women in Pesantren (Islamic boarding school) be able to show their skills through playing football (AFL). After knowing those benefits, it will contribute as the significant factor for Islamic boarding school to successfully develop an inclusive society with understanding other culture and empower the female students to take role in sport. Therefore, in this early stage before the Footy Coaching Clinic conducted, the seminar introduced all the team involved in the project to share their best practice or experience.

First of all, the speaker began with the leader of this project; Ana Surjanto. Besides Ana is an alumna of the female Islamic boarding school (Ma’had Al Jami’ah) of IAIN Salatiga, Ana is also an alumna of Monash University. She is an Australian alumna who has experienced training and playing footy in Melbourne. Further, Ana has become the AFL Asia’s first accredited female coach since April 2018 (see Inside Indonesia: http://www.insideindonesia.org/ana-surjanto-s-australian-football-family).

Following by the second speaker was Melissa Anderson. Melissa was from the representative of AFL (Australian Football League) Indonesia that shared about footy and Australian culture. She is currently living in Jakarta and working in Allied Pickfords Indonesia. She became part of AFL Indonesia since she has moved to Indonesia in 2016. With the Jakarta Bintangs Football Club of AFL Indonesia, she involves in running footy training in Jakarta every Saturday at Australia International School (AIS) in Pejaten South Jakarta. Further, Melissa is part of Women AFL Team that proudly represented Indonesia in AFL Asian Champ in 2019. Now she is passionate about women participation in AFL and will be collaborating for the Footy Coaching Clinic in Salatiga.

Lastly speaker was an inspiring woman of Salatiga who has studied for both her Master and PhD in Australia called Titik. Dr. Elisabeth Titik Murtisari is an ESL/ TESOL lecturer at Satya Wacana Christian University (UKSW Salatiga). She studied for her Master of Translation Studies at the Australian National University (ANU) and her Doctor of Philosophy (PhD) in Translation Studies at Monash University. She shared her insight on “Embracing Others: Basics and Sharing”. In other words, she shared the importance of intercultural understanding and further told her experience to the participants on breaking the stereotypes particularly in Javanese culture. This is needed to encourage women in developing their motivation that they have the same opportunities and rights in achieving their dreams, take part in any roles including sport, and develop their leadership and communication skills for their better lives.

Here are the next programs for developing social inclusion and women empowerment through webinar series talking about gender equality, equity and education. 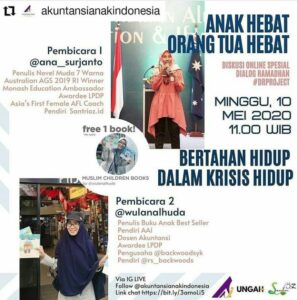 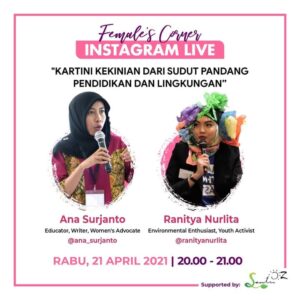 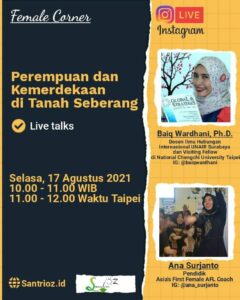